by Cecilia D'Anastasio for Wired magazine 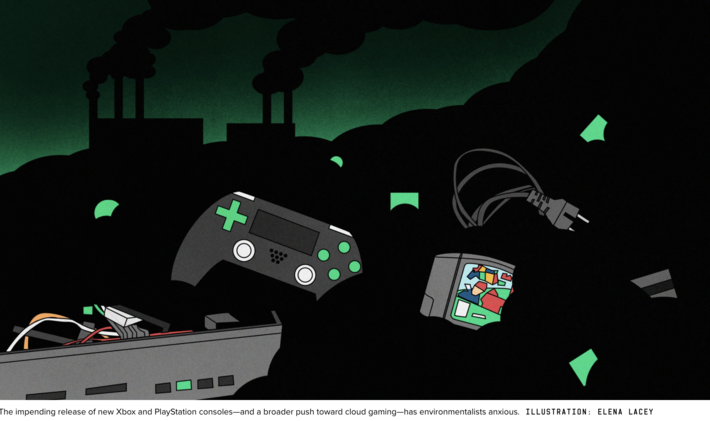 IT’S A SAD truth that escapist pursuits are not truly separate from real life, and some even have a nasty tendency to exacerbate real-life problems. And while gaming offers a reprieve from thinking about dooms both personal and global, it threatens to bring at least one of them—climate disaster—closer to reality.

What with plastic casing, mined-metal circuit boards, guzzled power, and e-waste, gaming has for decades been an industry unfriendly to the environment. Now, in line with more meta trends in tech, gaming’s technological underpinnings are becoming smaller and more invisible. Cloud gaming has arrived alongside digital consoles like the PlayStation 5 Digital Edition and Xbox Series S, where games are buttons on menu screens. You’re not going to see the equivalent of 700,000 Atari 2600 E.T. cartridges buried in the New Mexico desert.

But while many gamers will ditch the discs, experts say that less visible tech in no way equals less damage to the planet, and that the games industry as a whole is not on a path to reducing its carbon footprint. Right now, US gaming platforms represent 34 terawatt-hours a year in energy usage—more than the entire state of West Virginia—with associated carbon dioxide emissions equivalent to over 5 million cars. And it’s only going to get worse. “Total emissions are going up,” says Gary Cook, global climate campaigns director for Stand.Earth, an environmental nonprofit founded to challenge corporations’ climate practices. “There’s a real reckoning that needs to happen.”